So as the saga continues (do read the first and the second posts of the story).  My brother and family arrived soon after we got our 175 Sport.  For a period of a couple of weeks, the whole gang essentially lived out on the canal.  The good part of the Rideau Canal, besides the scenery, is that boating there is more slow and relaxed.  This is due to the fact that there are speed/power limitations since it is a canal.  In those areas, waterfront properties and even some restaurants utilize the waterway as the below pictures show.

A blue heron crane perched on one of many navigation signs. 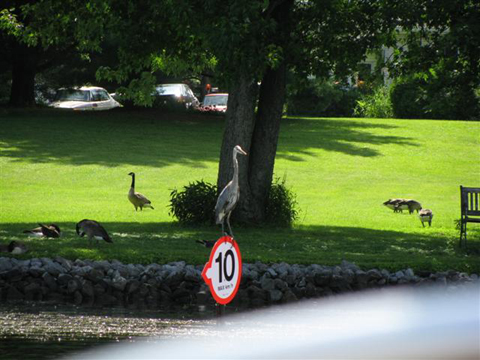 All manner of waterfront properties line the canal.  The below modest properties and river boat, however, appeals to me more.

Kelly’s Landing, from the street side it looks like a gas station.  From the canal side, it’s amazing with plenty of dock space.  Their seafood chowder rivals the chowder I had at Fisherman’s Wharf in San Francisco. 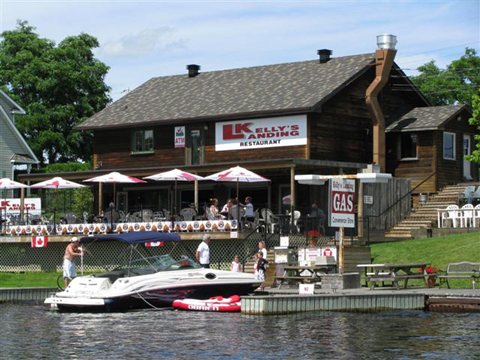 Back to the story, so you can imagine that we had a great time for the most part.  However, you have to take the good with the bad.  The bad part is that a Sea Ray 175 Sport is one small boat.  Add to that the fact that my wife is nervous about boating, being on the water and she doesn’t swim, then finally having a fairly crowded boat.  This, of course, put a damper on things especially when I started to get a serious case of footitis.  When it comes to my wife, I essentially kept my mouth shut as to not rock the boat, pardon the pun.  I was happy as is.

Then came the ugly.  By ugly, I mean the situation where one has a small boat, traveling on a waterway that is a prime tourist destination for all manner of cruisers and yachts.  Everything from 30′ weekenders to 110′ ship/riverboat (whose bridge/top deck canopy would lower to clear bridges) carrying tourists.  The ugly part is some of the boaters rushing to make the lock schedules, creating massive wake waves by plowing water.  This further complicated by the fact that being a canal, there’s hardly a day where the wind creates waves.  This makes it good for water skiing/wake boarding at all times, ugly for traffic, noise, and more wake waves.  This is the ugly of the Rideau Canal.

Now how does this all fit into me being a proud owner of a 2009 270 Sundancer, it fits because it prompted my wife to give me permission to fix it.  It started when we experienced a few harrowing moments when we were subject to these wake waves, being knocked about and/or even crashing over the bow (if we were anchored).  In the end, she still loved and wanted the relaxing boating lifestyle but in her words, “buy what you need to give me what I want.  I hate waves!”  Enough said but I thought that getting a new boat would be too drastic, that I would be overstepping my bounds.  I honestly thought she was talking about safety.  Please remember that my expectations up to now were low to begin with and I was happy so far.  So with that misdirected thought and me being very safety conscious, I had professionally installed ($$) a Raymarine A57D GPS/chartplotter/fishfinder, a SR50 Sirius receiver (which connects to the chartplotter) for satellite radio/marine weather, and a Ray49 VHF/DSC radio.  The AIS receiver was just out of my price range, as I was broke from the other stuff.  The service guys at Hurst Marina were great and we were all amazed on what I squeezed into my bow rider.  Basically, at a push of a button my wife can call for help.  The real selling point was that I could issue a DSC safety call/hail where all DSC radios in range will pickup.  That means that I had the ability to tell these 34′-44′ cruisers to “WATCH THEIR WAKES!”.  Problem solved.

Not quite as the summer went on.  My wife continued to dread the traffic, which in turn made me modify where we boated and when.  Thinking that this is it, little did I realize another fortunate event was about to occur…