How I Became a Sea Ray 270 Sundancer Owner… Done Deal

Finally, this story (links to the first, second, and third posts) is coming to a conclusion. However, it should be noted that this is not the end but really the beginning of a whole new story. Without dwelling on this further, Monday rolled around and “cough cough” I took the day off of work.

Obviously, you can see where this is leading. The Sunday before I spent the afternoon pitching to my wife why we needed the 270 by presenting a cost benefit analysis. I’ve used this technique before to smooth over the sticker shock of any large purchase. In this case, I presented the following:

So that was my case but, of course, my wife mulls it over and decides to ask her father for advice on what to do.  My heart pitched up and sank to the depth of Davy Jone’s locker. My father-in-law is an old fashioned Portuguese who believes in saving money for family and nothing else. He doesn’t speak English so as I was listening in to my wife’s conversation with him, I had no clue how this was going to play out. I swear that I’ve never been so nervous, dreading the final outcome. With all that happened, will this be the end? How will I go back to my lowly 175 Sport knowing how close I came to a cruiser? Time seemed to tick by at a snails pace. Finally, my wife addressed me, “my dad says that if we put the money in a cottage, we’d probably spend more and pay more taxes. And if you look at my cousin, whose cottage flooded this year, it’s not worth it.” I was bewildered since I didn’t even think of that, probably because I think that if you have a house it should be as good as you can make it; a cottage is a waste. My wife finished with “this boat can be our floating cottage.” At that moment, I swear that I heard the sound of clearing trumpets.

So on Monday over my wife’s lunch break, we found ourselves in Hurst’s business office inking the deal we made on Saturday with a few additions. First, our 2009 Sea Ray 175 Sport with the installed electronic package was traded in for $3000.00 over what I paid for it, essentially I got full value for it. Second, the artic white 270DA Sundancer had about 20K worth of manufacturer incentives applied to the invoice. Then finally because of it being late in the season, Hurst threw in the complete winterization, shrinkwrap, and storage (a $2500 value) for free. Of course, there was still a month left before the Rideau Canal officially closes so there was time to commission the 270, do the water test, and enjoy the symphony of fall colors on the Rideau. Of course, I was given another slip that could easily fit the 270.

Now I could write about how, for me and my wife, this was the best possible decision. But instead, I’m going to show some pictures I took of our [Canadian] Thanksgiving weekend out on the Rideau. So now the REAL story begins… 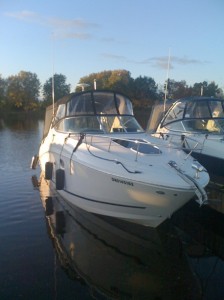 Heading out on Thanksgiving weekend, the trip was eventful since getting to know a new boat certainly bound to have some surprises. 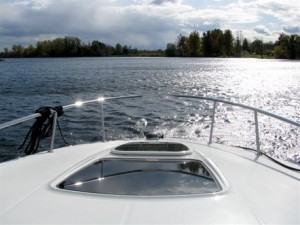 A picture of putting anchor at a spot close to the Rideau Provincial Park; while we enjoyed ice cream from the Ice Cream Float (his last day open). 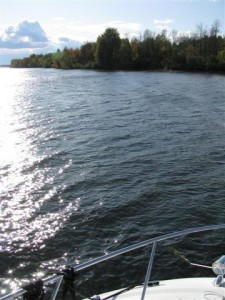 Some practical shots… And yes, I couldn’t wait to customize my 270 with wireless/wi-fi and Sirius satellite radio with a temporary installation. 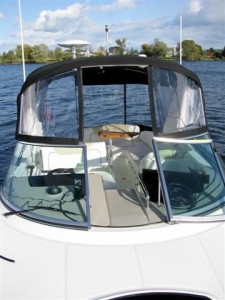 A shot from the stern, for its size there is a lot of room. And yes, I love the double seat helm since it’s roomy and I like having my wife sit next to me. Notice the Ericsson W35 3G router on the helm dash and the external antenna duct taped to the arch.

Here are some pictures as provided by Sea Ray 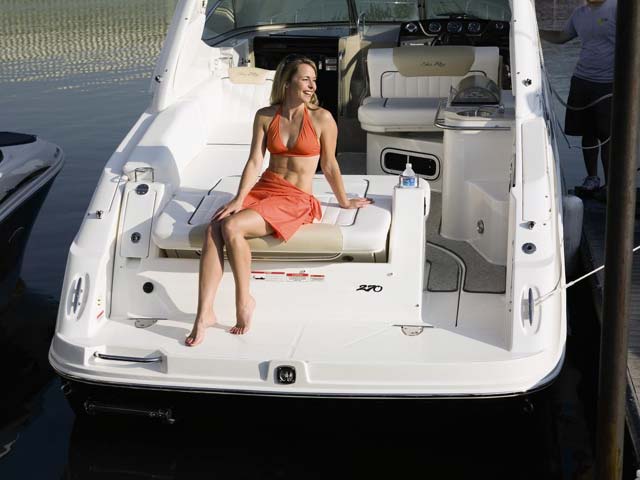 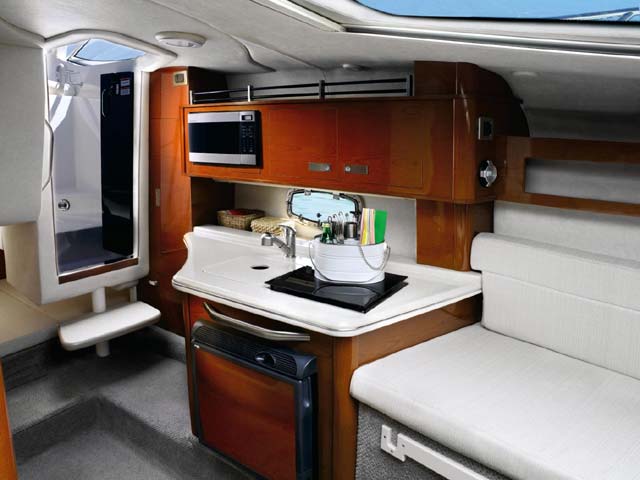 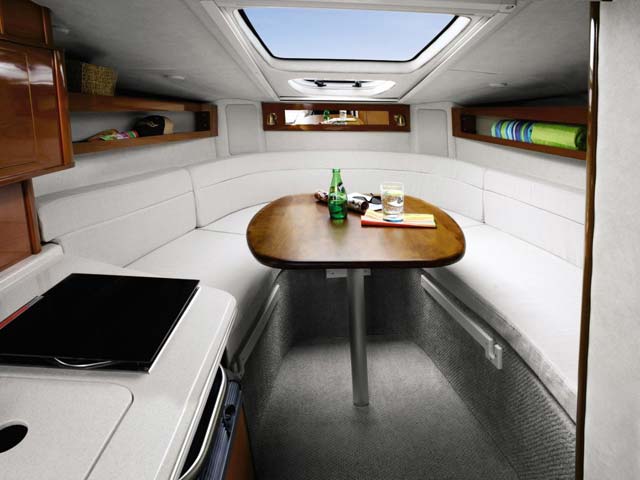